Corrosion Resistance Test the Ozak ML Series of rustproof type linear bearings features outer race surfaces with the most outstanding corrosion resistance; and for finishing, a surface treatment process has been used assuring the highest degree of uniformity. As a result, the Ozak ML Series bearings have a clearly superior resistance to corrosion than the conventionally used stainless steel bearings made of steel grades SU440C or QD51.
The following salt spray fog test results testify to the much superior corrosion performance capability of the ML Series. This is why the ML series is ideally suited for the work environment requiring a high corrosion resistance-a consideration that has played an increasingly more important role in recent years. 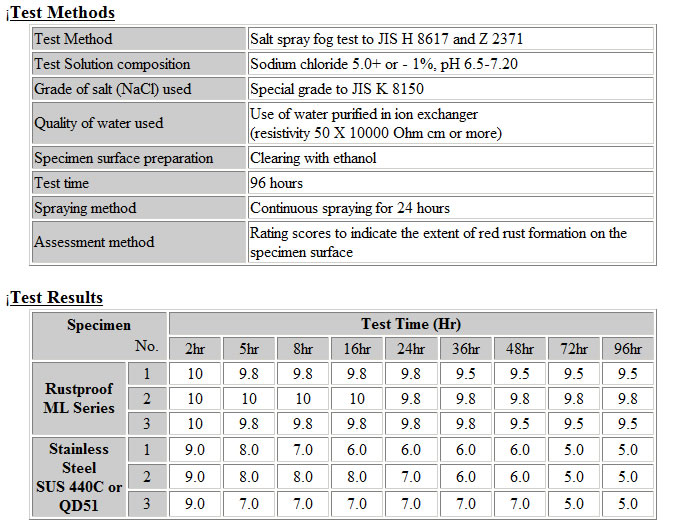 *M Series: This series offers the most effective protection against rust: Outer races have OZAK, with the M-Series anti-rust surface treatment while the balls use stainless SUS440C

*M2 Series: This is a more economic rustproof series: Outer races have OZAK, with the M-Series anti-rust surface treatment while the balls use stainless SUJ2. In general working conditions, there is only an extremely small probability of rust development on the oil- or grease-lubricated balls while rotating during operation.

The evidence of the salt spray fog tests has demonstrated that the OZAK M Series bearings have a much more favorable corrosion resistance than those using stainless steel (grades SUS440C. and QD51). The test results have already demonstrated the effective of the rust protection that is the hallmark of this series. Yet the acid resistance of these bearings is often called into question when inquiries are made. We have conducted acid corrosion tests to determine the behaviors of this series under acid exposure conditions. The results reported below.
1.Resistance to Hydrochloric Acid
Resistance to hydrochloric acid systems is determined on the basis of the hydrogen chloride spray test results. These tests have shown that the OZAK M Series has a much higher corrosion resistance to hydrogen chloride than the stainless steel bearings. For comparative assessment, the hydrogen chloride spraying test results for the OZAK M Series and for stainless steel bearings are compared in the table below.
2. Resistance to Nitric Acid
Test Method: ?@Nitric Acid Fuming Test to JIS H8616 4,5,3 Test Conditions: ?@ ?@Introduce 150cc of first-grade reagent-type nitric acid into the bottom of a 20cm glass desiccator and close desiccator lid. Leave for 30 minutes to let the nitric acid gas (fumes) fill the interior of the desiccator. Then place the degreased(ethanol-cleaned) specimen surface.